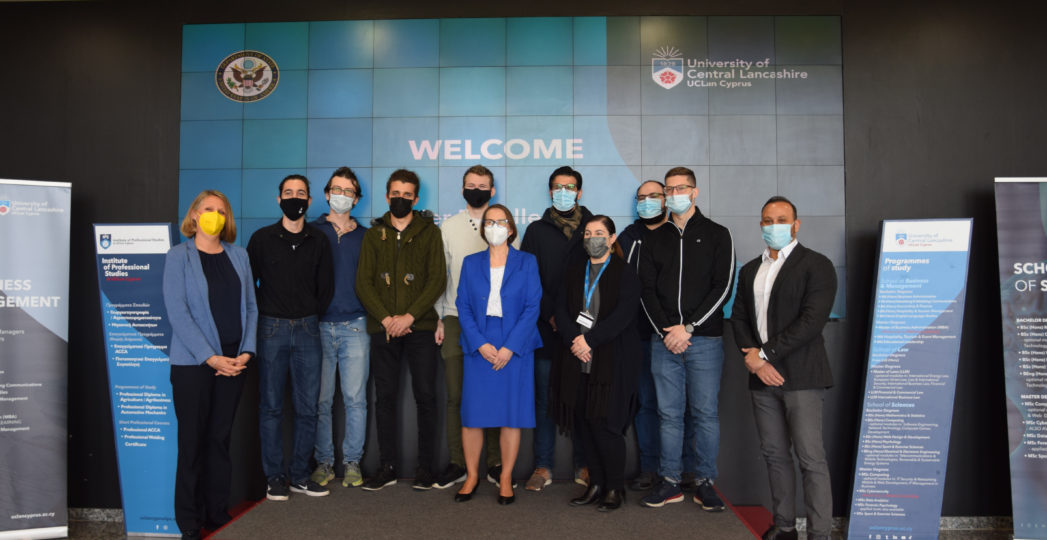 Visit by the Ambassador of the United States of America, Her Excellency Judith G. Garber, to UCLan Cyprus

On 28th March 2022, the Ambassador of the United States of America, Her Excellency Judith G. Garber visited UCLan Cyprus. During the visit, the Ambassador attended a roundtable discussion on “Human Trafficking in Cyprus”. During the discussion, she received information about the phenomenon of human trafficking on both sides of the Green Line from academics and PhD students of the School of Law. Outputs on the platform of Smuggling and Human Trafficking across the Green Line were discussed. The roundtable was attended by Mr William Stange from the US Embassy, Prof. Stéphanie Laulhé Shaelou (Head of School and Professor of European Law and Reform), Dr Nasia Hadjigeorgiou (Deputy Head of School and Assistant Professor in Transitional Justice and Human Rights), Dr Demetra Loizou (Lecturer in International Criminal Law and Humanitarian Law) and Ms Fezile Osum (PhD student).

Following this first session, another one followed on “Immersive Technologies” which featured two activities. The first activity, was led by Dr Louis Nisiotis (course leader for BSc Computing and the director of Rays and Vectors student-led game studio at UCLan Cyprus). Dr Nisiotis together with researchers and students, demonstrated the development of Intelligent Reality environments utilising eXtended Reality (AR/VR/MR), Artificial Intelligence, Robots, Computer Games and other emerging interactive technologies to support a plethora of educational, industrial and societal domains, with a focus on intelligent reality digital environments to support and promote cultural heritage and enhance the user/visitor’s interactive experience. The second activity, led by Dr Josephina Antoniou (course leader of MSc Computing at UCLan Cyprus and the chair of the university’s Ethics and Integrity committee) included a round-table discussion of ethics in emerging technologies, particularly for AI and Big Data analytics through examples of the work undertaken within the EU funded SHERPA project (https://www.project-sherpa.eu/). The participants including students and researchers discussed the importance of ethical values within the context of development and use of Smart Information Systems.

A few days following the visit by Ambassador Garber at UCLan Cyprus, Ms Fezile Osum was nominated for the US Department of State’s International Women of Courage Award for her work on refugees, anti-trafficking and LGBTI+ rights. The nomination was released to the press by the US Embassy in Cyprus on 30th of March during a reception held in Nicosia.  According to the US Department of State, the award ‘recognizes women from around the globe who have demonstrated exceptional courage, strength, and leadership in advocating for peace, justice, human rights, gender equity and equality, and the empowerment of women and girls, in all their diversity – often at great personal risk and sacrifice.’

The University would like to sincerely thank Ambassador Garber, the US Embassy in Cyprus and all their personnel for their continuous interest and support. The University would also like to congratulate Ms. Fezile Osum on her latest outstanding achievements.